Thousands took to the street as gas prices doubled. The government responded with curfews and tear gas. The president later announced the resignation of the government.

MOSCOW — The president of Kazakhstan declared a two-week state of emergency in two regions of the Central Asian country early Wednesday after nationwide protests erupted over rising fuel prices.

In Almaty, the country’s largest city, police fired tear gas and stun grenades at crowds of thousands of people who had refused to disperse, as protesters set police cars alight, according to wire services.

The protests, which began on Sunday, represent a rare manifestation of dissent in Kazakhstan, an oil-rich authoritarian country in Central Asia.

“Dear compatriots, I urge you to show prudence and not succumb to provocations from within and from without, to the euphoria of rallies and permissiveness,” President Kassym-Jomart Tokayev said in a video address Tuesday evening. “Calls to attack civilian and military offices are completely illegal. This is a crime that comes with a punishment.”

Early on Wednesday, Mr. Tokayev announced the resignation of the Kazakh government on the president’s website. He has no political opposition in Parliament.

The state of emergency includes an 11 p.m.-to-7 a.m. curfew; restrictions on movement, including curbing entry to and exiting from the city of Almaty; and a ban on mass gatherings, according to a document published on the president’s website. Public protests without a permit are illegal.

The cost of fuel doubled overnight after the government lifted price caps on Jan. 1. Amid increasing protests, the president of Kazakhstan said the government would again cap the price for fuel.CreditCredit…Vladimir Tretyakov/Associated Press

The declaration was made after several days of growing protests over the rise in prices for liquefied petroleum gas, or L.P.G., a low-carbon fuel that many Kazakhs use to power their cars. The government has argued that the price caps were financially unsustainable and lifted them effective Jan. 1. The turn to the free market essentially doubled the cost of the fuel overnight. 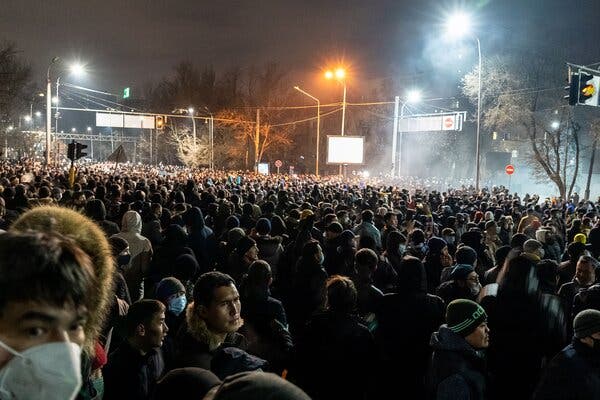 The protests began on Sunday in the southwestern oil town of Zhanozen, the same place where 16 striking oil workers were killed in 2011 by police after they demanded improved working conditions. (Human rights experts estimate the number of casualties could be several times higher.)

In Aktau, the capital of the resource-rich Mangystau region, 16,000 people protested Tuesday, according to the Russian news agency Interfax, while 10,000 gathered in Zhanozen.

In his speech, Mr. Tokayev said the government would again cap the L.P.G. price at 50 tenge ($0.11) per liter, less than half the current market price. But he also said no dissent would be brooked, urging young people “not to spoil their paths in life” and “not to poison the lives of loved ones.”

Kazakhstan is the world’s largest landlocked country, bigger than the whole of Western Europe, with a population of about 19 million. Its gross domestic product per capita in 2020 was just above $9,000, according to the World Bank.

Mr. Tokayev, who became president in 2019, is widely perceived as the handpicked successor of Nursultan Nazarbayev, a former Communist Party boss who had run Kazakhstan since its independence from the Soviet Union. The 81-year old Mr. Nazarbayev still wields tremendous power, holding the title “Leader of the Nation” and serving as chairman of the country’s Security Council.

By Tuesday, it was evident the demonstrators had moved beyond the fuel prices to demanding the removal of Mr. Nazarbayev from public life. In Aktau, protesters were shouting “Old man out!”